Morocco, it’s a real challenge to all five senses 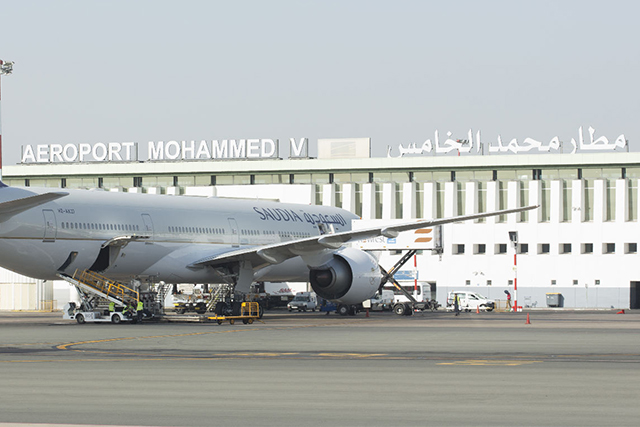 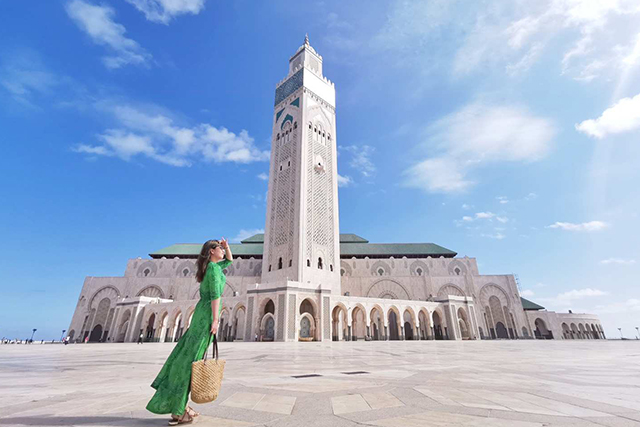 Guided sightseeing tour starts with the famous landmark in Casablanca. It is named Hassan II mosque, located on the Atlantic coast, is the second-biggest mosque in the world. Visit of mosque will let you to admire the charming views of the tallest minaret, architectural Moroccan design and sea.

You proceed to Square Mohammed V, which is characterized by French-style buildings that merge modern design with authentic touch.

Lunch break in the restaurant

Afterward, head to Rabat the capital of Morocco, once you arrive you will have a guided tour to popular monuments of Rabat, begin with the Hassan Tower with its incomplete minaret, the Monumental Marble Mausoleums of Mohamed V and Hassan II, which are decorated with charming carved plaster and patterned Zellij. 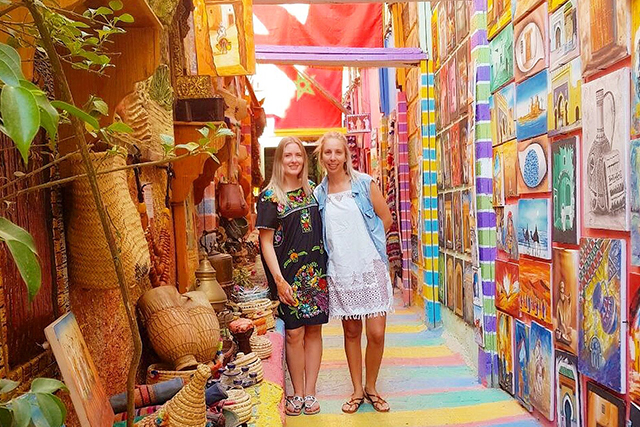 Breakfast in the Hotel
Leave Casablanca and head to Volubilis or walili where you discover the extensive roman ruins and the remains of roman houses.

The tour guide will fulfill your unclear information about Volubilis history. Thereafter, we drive to Meknes for lunch at leisure and continue discovering diverse sightseeing of the city. You will walk inside the Architectural Mausoleum Molay Ismail and take memorable photos of the huge Bab Mansour.

While you are enjoying your exploration of these fascinating monuments like the Grand Mosque, Muse Dar Jamai and Dar El- Makhzen, the tour guide will give you historical information to learn more about the history of Meknes. 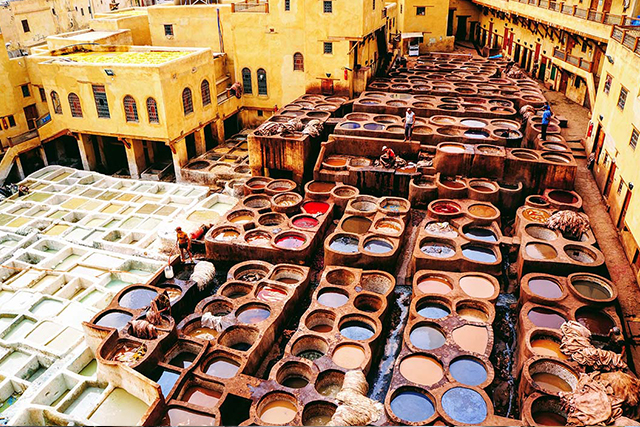 Enjoy your journey in Fez; you will be accompanied with tour guide to discover historical medrasas and give you details about the diverse Madrasas, Quarnic Schools such as Madrasa Bou Inania which built by Merenid Sultan Bou Inan, Madrasa El Attarine symbolizes the fine Merenid architecture, Madrasa El charrattine and its roles of bringing up new Islamic generations.

Afterwards, you visit the places of Tanneries and Pottery, which contain traditional handcrafts 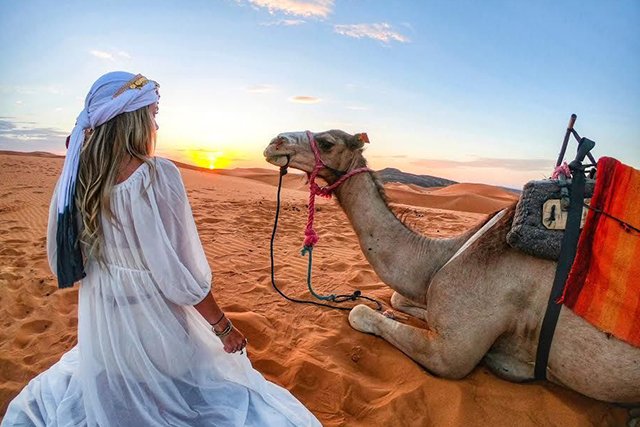 Breakfast in the hotel

Get ready for long Journey to Merzouga, travel via the Cedar forest of the Middle Atlas Mountains, Azrou and Ifrane. You may have stop in Ifrane (named the Switzerland of Morocco), then continue your trip to Midelt, you will have lunch break at the traditional restaurant in Midelt, after your rest continue your way to Merzouga across the pass of Tizi N’talghamt you will pass through, Aoufous and the valley of Ziz where you will have stop for a panoramic view of oasis of Aoufous in the Tafilalte region, Errachidia then continue via Erfoud which is an oasis town, continue your way to Merzouga, Upon arrival you will ride your camel in order to trek through red dunes of Merzouga on the way to Erg Chebi for overnight, upon arrival you will be welcomed with a cup of mint tea and you will spend the night in luxury nomad camp.

Moreover, you will enjoy the cooked delicious meal of Tagine, beside the warmth of the fireside, listening to the Drum Party and story swapping, tales of nomad life 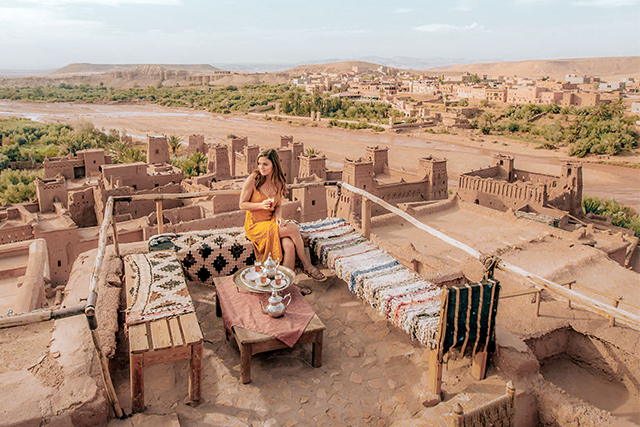 Get up early to catch the supernatural sunrise, after then enjoy your Moroccan breakfast.
Afterwards, drive along the popular road of thousand Kasbahs, passing by the small Berber town Tinghir.

Stop for a walking through Todra Gorge, where the ancient amazighin villages, fantastic Ksours and green oases provide spectacular views.

stop to relax and enjoy your lunch at the local restaurant coffee shop.

Continue your way to Ouarzazate 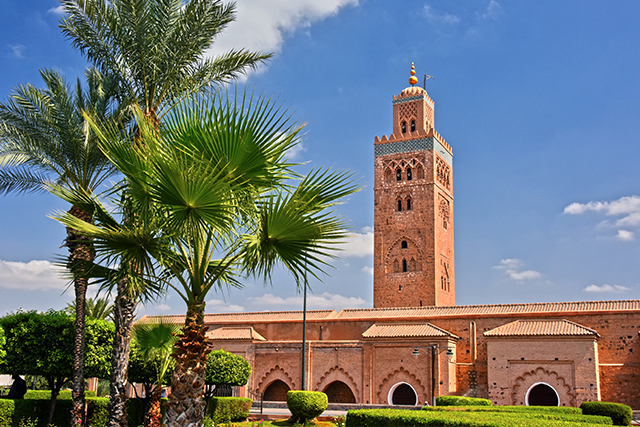 Head to the Pearl of the Moroccan south Marrakesh via the pass of Tizi-Chika, along the road you will admire the beautiful views of Atlas Mountains as well as the stops for taking photos.
Upon arrival enjoy you lunch meal in typical restaurant

Transfer to your hotel to rest 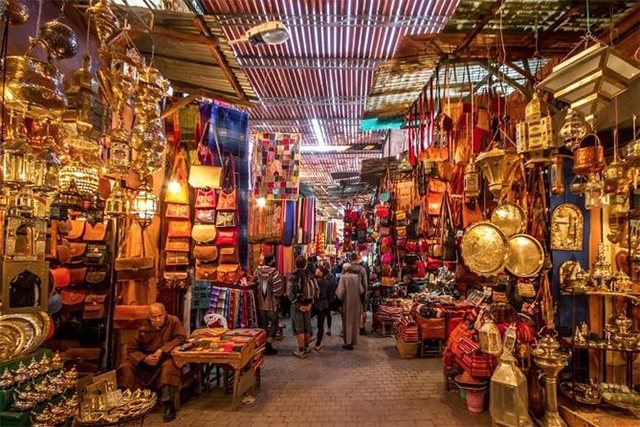 Begin your day with guided tour of the city Marrakesh. This tour will include the top attractions such as Bahia Palace, Saadian Tombs, Koutoubia Mosque, and Medrasa Ben Youssef, Majorelle Garden.

Then you will continue your tour to the old Medina and its popular souks. Moreover, you will visit the best famous place, which is Jamaa El fna Square.

It is full of entertainers and comedians, storytellers, snake charmers, water sellers, orange juice stalls. Before ending the tour, you have choice to eat your dinner in the Square Jamaa El Fena. 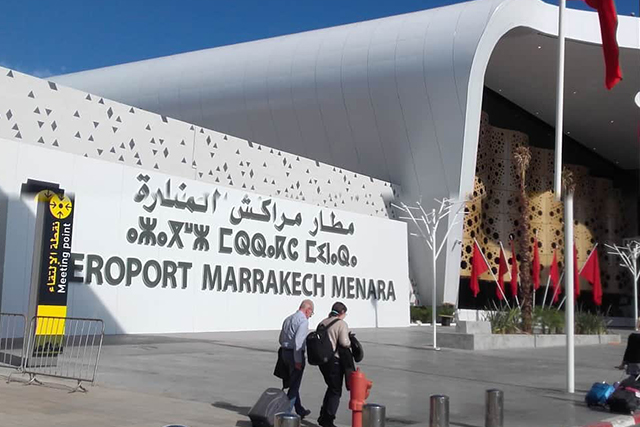 Open chat
Need Help?
Powered by
Hello
Can we help you !